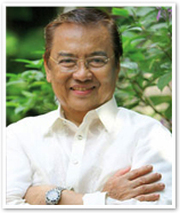 Photo from climate.gov.ph
A human rights advocate, an environmentalist, a social reformer. He has occupied five Cabinet positions including as Secretaries of the Department of Agrarian Reform and the Department of Environment and Natural Resources

He was a Senator for 12 years (1987 to 1998) and as a Congressman, he initiated the filing of the impeachment complaint in 2000 against a then popular president.

In the dark days of Martial Law in the Philippines, he became a freedom fighter.  Being a vocal critic to the Marcos dictatorship he was issued a shoot-to-kill order.  He went underground, escaped and went on self-exile to the United States. There, he organized the biggest overseas opposition movement, the Movement for a Free Philippines. Later, when Ninoy Aquino was assassinated, Alvarez organized the Ninoy Aquino Movement (NAM) directing the exposé of the hidden Marcos wealth and convincing the US government to cut off military aid to the Marcos regime.  He was awarded the Outstanding Human Rights Award by the Fund for Free Expression in New York.

After the People Power Revolution, after a life in exile for 13 years in the US, he, and his family, came home.  In 1987 he was elected Senator.  In the Senate he became Mr. Environment. He chaired the Senate Committee on Environment for ten (10) years making the environment a major national concern.  SInce then, he has been a leading voice of the environmental movement in the country.

He was responsible for the introduction of unleaded gasoline in 1994, bringing the 3 major oil players in the country, Shell, Caltex and Petron, together to sign the Healthy Air Pact. That move initiated the removal of lead from gasoline.

Since 1988, he consistently warned of the disasters of global warming and climate change.  He organized the First Climate Change Conference in Asia attended by 32 Ministers and 3 Heads of Government in February 1995 in Manila.  The Conference came out with the Manila Declaration that took full cognizance of the extreme vulnerability of our archipelagic and other island countries to sea level rise and the ferocious changes in weather conditions.

He crafted the Philippine Framework Strategy on Climate Change.

An Outstanding Alumnus Awardee of the University of the Philippines (UP), he has a Masters Degree from Harvard University, USA.

He was Captain of the triumphant Philippine Debating Team that brought home the prestigious and much coveted Wilmot Cup in 1961.

He is a recipient of the Order of Lakandula-Grand Cross Bayani (Hero), one of the highest honors conferred by the State upon an individual whose life is worthy of emulation by the people.